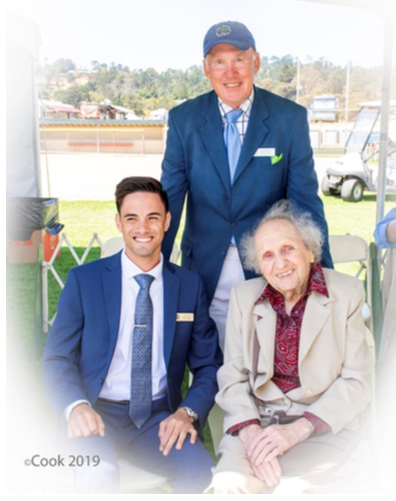 Those who knew her as Dorothy or Dottie Macdonald or Dorothy M. Macdonald were often unaware that Dottie had many more names. Dottie was born near London on November 21, 1926. Her full name was actually: Dorothy Thalassa Christine Olive Madge Anne Macdonald. She was named for several of her mother Madge's friends. Dottie had one brother Angus Norman Macdonald who was two years older, being born December 25, 1924.

Dottie's father Dr. Norman Macdonald was a renowned London surgeon at a Children's Hospital and her paternal grandfather Macdonald ran a test farm for the newspaper "The London Times." There were jokes that the song "Old Macdonald had a Farm" was created for her grandfather. Dottie's mother Madge was one of three girls and maintained close relationships with her sisters Betty and Renae (pronounced Renny). Dottie's maternal grandparents had Sealyham Terriers and Dottie was raised with Fox Terriers and Welsh Terriers.

Tragedy struck the Macdonald family in 1940 at the beginning of the Second World War. While Dottie's father was performing surgery on a young patient, a bomb was dropped on the hospital where he was operating, and all were killed instantly.

Madge Macdonald like many of her fellow Brits immediately volunteered her services to the Nursing Corps. She was involved with the Dunkirk evacuation. A young soldier came up to her with an injured Kerry Blue he had rescued. Madge took control of the dog, achieved successful medical care for the dog's shrapnel wounds and he lived the rest of his long life with the Macdonalds. He was called "Smoky."

Madge's sister Renae was then living in Los Angeles and working at Metro-Goldwyn-Mayer Studios. Madge decided to go with her two children to live near her sister. She refused to leave her dogs behind, so it was a struggle to find a ship's captain to take the 5 Terriers on board. Eventually one captain relented, and they became part of a 100-ship convoy to America. They made it to the Panama Canal and then up the west coast to Los Angeles, eventually settling in Santa Monica.


Sponsoring the three Macdonalds to America was the incredible actor Charles Laughton who maintained his personal relationship with their family for decades. Dottie held Mr. Laughton in the highest esteem possible. He would often call, and Laughton and his driver would pick Dottie up and drive her to school.

Dottie's brother Angus joined the US Navy and served honorably during the second World War. Unfortunately, later, the Macdonald Family suffered a second tragedy. Angus volunteered often with the Boy Scouts and he fell to his death in a mountain climbing accident.

Dottie's mother Madge decided to get involved with another breed and chose Yorkshire Terriers which she bred and showed. A late edition to the family was a Redbone Coonhound who followed the Yorkies home one day. Dottie went first to Stanford at age 16 and then later transferred to UCLA near her mother's home in Santa Monica. By this time Madge was also working at Metro-Goldwyn-Mayer Studios as a Technical Director. Although uncredited for some of her work, she worked on National Velvet, Bad Bascomb, Courage of Lassie and The Green Years among other films.

Dottie spent most of her business life working for United Airlines. She loved her work which afforded her travel to many countries. This too came with her many foreign judging assignments.

It was Dick Webb of the Webline Setters who was the magician who brought Dottie into the dog world of Conformation. As much as Dottie loved Dog Shows, Field Trials were always first in her heart. She loved being on horseback and following the dogs.

It was also Webb who introduced Dottie to the breed that would define her: Brittanys. She would always talk Brittanys to anyone who would listen. In later years she added a Nova Scotia Duck Tolling Retriever to her family.

Dottie began judging at dog shows in 1974 (Field Trials and Hunt Tests in 1973) and soon rose to the top ranks through her personality and knowledge of the breed Standards. It was always a joy to sit with her at ringside at the group rings and listen to her commentary on how each dog compared to its Standard. Dottie was also a huge tennis fan who followed her favorite Roger Federer religiously.

Dottie became one of the most popular judges in America as evidenced by her Judging Career. Dottie judged Best-in- Show an amazing 154 times and the Sporting Group alone, 279 times. Her last judging assignment was at Del Monte Kennel Club July 12, 2014.

In 2001 Dottie reached the pinnacle of Dog Shows when she judged Best-in-Show at Westminster. She had ordered a special kilt from Scotland with the Macdonald plaid. Her splendid attire received almost as much commentary as the Bichon she placed Best.

Dottie relocated to the Monterey Peninsula by 1984 and lived many years in Carmel Valley, eventually moving to assisted living at The Cottages in Carmel. Her friends visited her or phoned her almost daily. Her interest in dog shows never waned and she like everyone was frustrated by the Pandemic. Dottie was 37 years a member of the Del Monte Kennel Club (Life Member) and served as President working with two other Westminster Best-in-Show judges: Derek Rayne and Jackie Hungerland. Before the Pandemic, Dottie was visited frequently by Norwegian Elkhounds, an ASCOB Cocker and several Champion Sealyham Terriers.

It is unfair to state that Dottie Macdonald left no survivors. Dottie is survived by Sue Bienkowski (her Conservator), judge friends Pat Trotter, Jeff Pepper, Pluis Davern, Anne Katona, Ginny Lyne and so many more. Also, Mari-Beth O'Neill of the AKC, Bill & Taffe McFadden, members of Del Monte Kennel Club and her devoted staff at The Cottages.

Other links for more information about Dottie MacDonald